On May 21st, the first full day in Portland, we met with First Stop Portland for the first segment of our tour. First Stop Portland is an organization run through the University of Portland that arranges tours of the city.  Their tours highlight Portland’s livability, sustainability, politics, business, and current community projects for visiting delegations, students, or other interested parties.

One of the most inspirational locations we visited was the Rebuilding Center, a project run by Our United Village, with Shane Endicott. Our United Village is a non-profit organization.  The Rebuilding Center project focuses on the adaptive re-use of materials. The center was founded in 1998 by volunteers, and has expanded since then. The 65,000 square foot facility is built out of locally donated and salvaged building materials. From the amalgamated metal front gate made of wrench’s, hammers, shovels, and anything else that can fit, to the entrance that also functions as a community space made from cob. Cob is one of the most natural building materials and is composed of clay, sand, straw, water, and earth.

The entrance has been shaped into hand-molded benches and 4 trees representing the seasons.  These trees have been hand-textured with spoons and welded from recycled, local sheet metal scraps. The space was unlike anything we had seen. The Rebuilding Center has the largest volume of reused building materials in the region, and they range anywhere from 50-90% less than their original price. Inside you can find beautiful French doors, toilets, and cabinets, all the way down to the faceplates for your electrical sockets. The Center accepts donations and also has a deconstruction business, in which they will come to any location and deconstruct, rather than, demolish, your house to salvage all usable materials.

Apart from the sheer brilliance of the idea and the wacky architecture, the purpose of the Rebuilding Center was perhaps the most simple, yet revolutionary idea. They reuse local materials not primarily to keep “waste” out of landfills, but instead to create local jobs, to synthesize community, and to create a space where people can come together and build relationships. The environmental benefits are a secondary bonus. This concept helps solve one of the key questions we have been asking, including: “how do you create and initiate sustainability”? Building community was a tool that was oozing from Portland, and one that we should take home to Victoria. Community is the key starting point for sustainability.

Later this day we also visited Doug Shapiro’s Ecoflats development in East Portland.  This previous brown-field site has been turned into a cutting edge LEED certified building with some very unique features. Some of our favorites were the main foyer with a mural by a local artist, hanging bike racks instead of parking spaces, a monitor in the foyer showing exactly how much energy each unit was using (open to the public for all to see), the roof lined with solar panels.  Even outdoor communal porches acting as indoor hallways creating shared space and community in a multi-unit building, not to mention being located above a sustainable eco brewery! 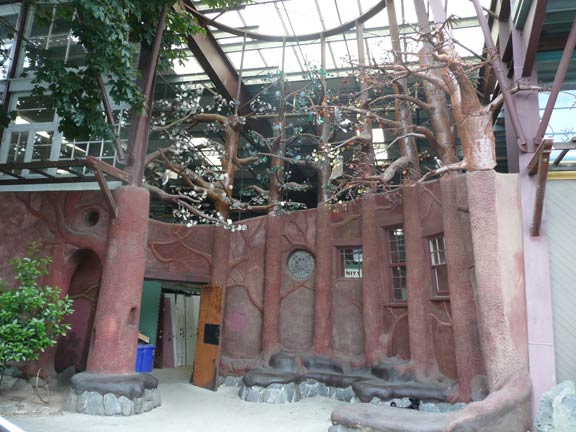 City Repair, a part of the Planet Repair Institute, operates out of a unique house in a unique neighbourhood in Southeast Portland. Mark Lakeman introduced the class to the process of "grassroots urban planning." He referred to grassroots urban planning as being accomplished by a group of "joyful collaborators" who develop their projects to accomplish many things at once. For example, every project undertaken by City Repair incorporates mentorship and education for youth, as well as community and place building.

The Planet Repair Institute was trying to empower people to feel optimistic and included while reclaiming public space and permeating the "private space membrane." Lakeman indicated that the United States had the lowest number of gathering spaces of all first world countries. He contrasted this with Sardenia, a vibrant city with 38 meeting places of squares, vibrant and busy storefronts, and well used public streets. Sardenia has 30% less crime than Portland, Oregon. Coincidence?

To combat the imposing nature of Western space, what Lakemen refers to as "involuntary space" and a physical expression of the "violent oppression of indigenous culture," City Repair has reclaimed the streets and through painting and makeshift construction, transformed them into public squares for use by the community. The most important piece of sustainability, from this perspective, is "the city network." After all, we're not the only community in the world.

Following our morning with the inspirational Mark Lakeman, we met Mighk Simpson who introduced the principles of Permaculture. Permaculture aims to tune into the energetic flows through the landscape to create a connected and symbiotic ecosystem. Simpson compared the philosophy of permaculture to that of surfing: a surfer does not go out to control the waves and ocean, but feels the flow of the water and rides what is provided by nature. Similarly, permaculturists observe the physical environment, and work with the soil type, available lighting, available space and available community to create a functioning ecosystem. Ultimately a seven layer garden emerges (see figure).

In the City Repair neighbourhood, permaculture takes on an all new form--as does the urban environment. Nearly every inch of available space has been incorporated into the ecosystem. Rainwater from the roofs is collected and used, or flows into a passive stream. The berms next to the street have vegetable gardens growing. Street trees bear edible fruit. Back yards host chickens, or large artichoke bushes, and front yards have shared vegetable gardens. Fences are coming down, allowing a free flow of energy, people, animals and nutrients through the community.

While the City Repair neighbourhood may be far beyond what most communities can do, the concepts can be easily brought back to other communities, to not only foster ecological wellbeing, but also social cohesion and improved accessibility. By combining the philosophies of Mark Lakeman on social space and the permaculturist dogma of Mighk Simpson, neighbourhoods could easily transition from an ill-used private space into a more sustainable and socially cohesive public space.

On Wednesday, May 23, our class took a tour of Portland’s Pearl District.  Since the mid 1990s, the Pearl District has undergone massive urban renewal from its former state as an industrial warehouse and rail-yard. Today, the Pearl District is a thriving neighbourhood, full of trendy restaurants and hip bars, and is the “place to be” on the weekends.  It even has a park that functions as an urban beach for families during the summer.  This development was given three main priorities: high density residential housing, open street car development, and open spaces.  These priorities have all been achieved to a certain extent.  In terms of public transit, the neighbourhood was designed as what is deemed “transit-oriented development”.  Transit-oriented development designs a space specifically for optimal transit access.  In the case of the Pearl District, this has been done in the form of the street car, thus achieving the second main priority.

However, urban renewal in Portland has not been without faults.  The major issue stemming from this has to do with social justice.  Prior to the housing boom in the district, a family could find an apartment in the Pearl District for around US$250,000.  Now, the same space would cost around US$1.25 million.  This makes it extremely difficult for families to move into the area.  Rather, as our tour guide Mark Raggett, from the City of Portland Bureau of Planning and Sustainability, mentioned, the region was designed in a way to attract DINKS (duel income no kids) residents and retirees.  Further, the district has few of the amenities which are needed for families, such as grocery stores and schools.

The Pearl District can be compared and contrasted to Vancouver’s Yale Town, in that it is a recent development that has become a popular and trendy place in the city.  Both districts have a similar history related to industrial use, which is evident in the revitalised brick buildings and converted loading docks.  However, the design principals of the two spaces are quite different.  For example, in Yale Town, development has focused on “tower and podium”, family amenities, and nearby accessible green spaces.  Whereas in Portland, the Pearl District was developed for working people, is less dense, and has fewer towers.  There is also a considerable difference in the day-time vibrancy of the two districts.  Yale Town is full of shops and large public spaces which attract a number of people.  In contract, The Pearl District is lacking in these amenities.

As we rolled from the North along the AMTRAK, I looked south and saw Portland for the first time. The city shares the Columbia River with Washington State to the north, and is split through the middle by the Willamette River.  Portland has been referred to as the “City of Bridges”, “City of Roses”, and “Beervana”, and is shrouded in green with a small handful of buildings reaching for the sky. Despite sharing a mild wet climate, this is no Seattle, nor are we in Vancouver.

Portland is a funky city that turns by its own crank and to its own rhythm.  It is no surprise that resident’s bumper stickers dote the saying: “keep it weird”.  On the surface, Portland is a clean, green city, comprised of walkable 60 metre blocks.  It is also very much a bikable city, including over 500 kilometres of bikeways. Interestingly, the city is divided into North, Northwest, Northeast, Southwest and Southeast sections.  This makes it important to know where you are going, as one could easily end-up on the wrong side of town!

Portland did not escape the American highway expansion of the 1960s and 1970s. Thus, two major highways can be found cutting through the heart of the city.  Fortunately, the city was forward thinking during the early 1970’s. During this era, the city revolted against freeway expansion and managed to redirect funding to other transportation projects, including the MAX light rail.

Portland is considered a “young” city, with an abundance of people in their 20’s and 30’s.  Recent college grads and artists come in search of expression, liberal opinions, and for community involvement.  To many, this is an urban utopia. With transit options abundant and accessible for those who live near downtown or within transit-oriented communities, affordability can be found.  However, this may not last long. As the city continues to grow and attract newcomers, mainly due to its good planning and abundant opportunities, and as land values increase, the city will face tough challenges in maintaining and creating affordable housing.

Portland is dense, but unlike Vancouver’s population, which is situated over 153 square km, Portland’s population is distributed over 377 square km. Within Portland there are a multitude of distinct neighborhoods, including South Waterfront, Lloyd, and SoMa, all transit oriented districts. Portland’s downtown is planned around a free street car service that has made the area highly accessible.  However, those communities outside this transit accessibility find themselves heavily dependent on their automobiles.

Portland consistently ranks high on livability and sustainable indices for American cities, yet when compared to Canadian and European cities, it falls short. But when examining the question of “what is sustainability?” we can ask ourselves to broaden our scope of inquiry and examine other areas of sustainability, which Portland is proving to be a leader.

Portland is a city that prides itself on community engagement in important development decisions. Working with 96 neighborhood associations, the city has come to realize that their best practices and policies come directly from public consultation. This has led to greater social equity amongst Portlanders and has reinvented the organization of public and private space.